At FEMYSO, we are utterly outraged at the political decision of the European Court of Justice (ECJ), which once again gives a free pass to employers to ban the Islamic headscarf. This is nothing less than a blatant reduction of the rights of visibly Muslim women in the EU, and thus nothing less than the institutionalisation of Islamophobia.

Disguised under a layer of ‘neutrality’, the judgement in the joined cases C-804/18 and C-341/19, Wabe and Müller, on the right to wear religious clothing (headscarf) at work, solely panders to the prejudices of customers and employers by favouring racism over the right to non-discrimination. Indeed, the ECJ prioritises the financial interests of employers and prejudiced customers as more important than the rights of those who are perpetually made vulnerable and kept in a vicious circle of discrimination. This case demonstrates that Muslim lives are a justifiable exception to otherwise robust anti-discrimination legislation in the EU. 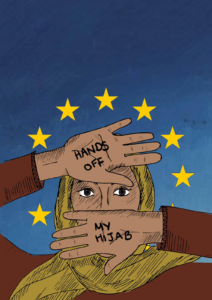 Instead of acting as a powerful voice for the social and human aspect of European integration and protecting the rights of those who are most marginalised in our “Union of Equality”, this ruling provides a legal basis for further discrimination against Muslim Women in the job market. In simple terms, the prejudices of some are being placed above the human rights of others.

This political act adds to the hostile environment that Muslim communities face across our region. The

Impact of islamophobia on our lives both in a structural sense – of which this is an example – and everyday prejudice, cannot be understated, with Muslim women most often as the biggest victims who.

We call on the European Court of Justice to revise this judgement, and EU Member States to stop the obsession with Muslim women’s bodies. We call on the EU and all its institutions to recognise the impact of Islamophobia on its citizens and to work alongside civil society to tackle this disease.

FEMYSO commemorates the gruesome Srebrenica genocide on Muslim men on boys in 1995 and honours all the victims. We at the FEMYSO family send our heartfelt condolences to all families and friends of the victims, and remain committed to our fight against the root causes of this massacre.

It is exactly twenty-six years ago on this day that the worst human massacre took place on European soil after World War II. It was a crime solely driven by a hatred for Bosnian Muslims and enabled by a blatant institutional failure of UN Peacekeeping forces. Human beings were singled out for their faith, whose name sounded ‘Muslim’ while not being religious, to suffer great inhumanity and in the end, to be brutally murdered. Men and boys were separated from their families, women and girls were subjected to rape and torture.

The brutal murder of more than 8000 Muslim men and boys in Srebrenica however does not seem to have left a necessary mark to #NeverAgain. As we see the spike of mainstreamed and normalised Islamophobia amongst public and political speeches, rapidly disseminated by traditional and social media, and finally implemented by legislations, we must remain ever committed to fight this injustice while protecting all racialised minorities.

This is why at FEMYSO, we call for:

We will continue our fight against any form of racism and our work for a more diverse, cohesive and vibrant Europe.