To see is to feel…

Activism. It’s a beautiful concept. When I started thinking about what activism entails and how it might inspire people, I first had to define activism for myself. My mind wandered and I started jotting down words like positivity, community, unity, and fulfillment. I think we can all agree that doing something, anything, for a cause you love, brings you happiness and fulfillment. A sense of unity and being part of something bigger than yourself. At least, that’s what I thought. I started digging a little deeper and low and behold, I learned a bitter truth about the term activism.

Activism is not defined by words like happiness or collectivity.

Activism speaks to the darkest, twisted parts of human beings. It evokes feelings of guilt, sadness, and grief. We might not like to admit it, but the times that you see the desperation a child’s face for a Red Cross commercial, or when you see a heartbreaking documentary about innocent teens being wrongly prosecuted when you hear the news about a Black boy being shot to death by police officers.

When that feeling of powerlessness all but brings you to your knees, that’s when true, real activists are born. That’s the definition of activism. It’s ironic and beautiful in a way: we feel most inspired to stand up when others are beaten down.

Not soon after this, I made another realization. Activism is a result of a tragic and downright heart-wrenching process. For some, including myself, the pain and heartbreak of seeing others deal with hardship is unbearable and we start closing our eyes, blind to the injustice of the world. Although it is understandable, it is not acceptable. As mentioned before, in order to stand up for what’s right we have to be inspired to do so.

We have to open our eyes.

As privileged, Western Europeans it’s our duty to open our eyes, and truly see, what our brothers and sisters go through in Syria, Palestine, Yemen, and Ukraine. Some might think of this as madness, because why would you want to ruin your night by occupying your mind with injustices that you don’t have any control over anyway? It is crucial for us, people, to do so… It is truly sorrowful, but can’t we agree that at the root of wars, big political discussions and ethnic cleansing is not only a hunger for money and power but a clear lack of sympathy and care for others? Seeing what others go through truly looking and listening will give us insight into the works of our own leaders and governmental officials. It will educate us and others on who and what we surround ourselves with. It will hopefully cure the growing desensitization we have toward the people around us.

Besides beautiful, ironic, and tragic, I’ve found that activism is also frightening. I viewed activism as this big commitment, something a nineteen-year-old isn’t capable of. But, as a result of accepting, seeing, and educating myself on activism and all that it comes with, I learned what might be the most important and defining part of ‘activism’.

It’s about understanding that activism can take different shapes and forms. I’ve realized that activism isn’t always some grand gesture. It does not mean you have to enroll yourself into some program or volunteer at a non-profit organization. Activism can be just as helpful and fulfilling in small doses. If looking at that documentary about wrongly prosecuted Black teens lifts the shades of your judgment and prejudices against other minorities, do so! You can proudly call yourself an activist. If there is even the slightest chance of you standing up for that girl in your class that’s being targeted, you are an activist.

Activism might entail watching that documentary about that case you’ve been putting off. It might be watching some videos about the apartheid in South Africa or looking into the origins of the Russia-Ukraine war. I want to stress the point, that everyone, whether you’re poor, rich, small, big, or have connections or not, everyone can make a difference. Everyone can become an activist. If only you let yourself be inspired.

You have read into the history of a conflict and added very valuable information to a discussion or corrected a slightly biased teacher about a particular issue or raised awareness about Uighur concentration camps with the result of ice skaters declining their Chinese medal or voted for a group that apologizes for the racial offenses they’ve once committed.

That right there will have more effect and power than you will ever know.

If we can’t directly impact, let’s at least stand with them in solidarity. Let’s make sure we have their back, not giving lies, division, and hate the space to stab them in the back because of how great of a gift it is to feel truly and utterly supported by a stranger. I have been grateful enough to have had this specific instance happen and words can’t describe how fortunate, loved and fierce I’ve felt.

If so, buckle up, and maybe, just maybe, we will win and return home with yet another, but the final definition of activism. “Activism: (noun) actions in support of or opposition to one side of a controversial issue accompanied by feelings of positivity, community, unity, and fulfillment”.

FEMYSO’s participation in the People’s Summit 2.0 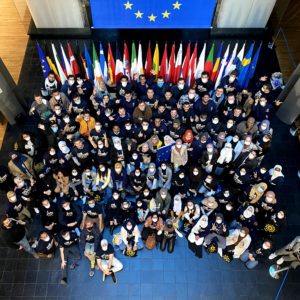 YOUNG PEOPLE BEING DECISIONAMAKERS DURING COVID-19